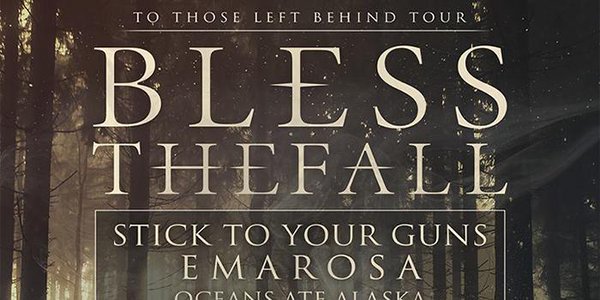 On November 14th I had the opportunity to see one of my favorite band, Stick to Your Guns, for the third time at Wooly’s in Des Moines, Iowa. Cane Hill, Oceans Ate Alaska, Emarosa (they dropped out), Stick to Your Guns and, Blessthefall are a part of the To Those Left Behind tour (more dates here). This was one of the best shows I have seen in a long time, probably since Stick to Your Guns, Rotting Out, and The Story So Far were at Gabe’s almost two years ago. Hardcore shows are the best to go to in my opinion, the energy and atmosphere are amazing and they are never disappointing even when the bands playing are absolutely horrible. The people are so inviting and aren’t judgmental, and I always leave with a good story to tell.

The first opener was Cane Hill, a metal band from New Orleans, Louisiana. I do not have anything positive to say about this band other than the fact that the lead vocalist was pretty attractive. The band did not seem comfortable on stage at all, and had a horrible presence. Wooly’s was almost full at the point and only about 1/8 of the crowd seemed to be enjoying themselves.

After that was Oceans Ate Alaska, a progressive metal core band from Birmingham, UK. They were definitely an upgrade from the first opener, and could at least get the crowd a little more enthused. They had a great stage presence, and you could tell there were a lot of fans there to see them. Besides the pretty lame push pits they had going on during their set, they did sing happy birthday to their guitar player, Jibs, at the end which was pretty sweet. Overall they weren’t my cup of tea but they had a good sound so you should give them a listen.

Up next was my favorite band, Stick to Your Guns, a hardcore band from Orange County, California. After asking many people I knew there, most of the crowd was there to see Stick to Your Guns. I made sure to get a front row spot with my one of my friends from home, but there was one chick with her boy toy standing next to us that decided she didn’t like how close every one was to her, so she proceeded to bump everyone with her hips to get them away from her. Which if any of you have been to a show like this, knows that didn’t work very well. Everyone just kept pressing back and once Stick to Your Guns started actually playing the crowd went crazy. There were people crowd surfing, pitting and rushing the stage, so it was inevitable that she was going to be crowded. Nearing the end of the set, I was getting pretty fed up with her prissy shit. You don’t stand in the front row with the die hard fans and not expect to get crushed, especially when you aren’t even singing along like everyone else. The second to last song they played was, “Diamond” one of my favorite songs of their album Diamond, so obviously I am going to get rowdy. I decided I was done putting up with her and when it came time to yell “This is my life and this life is my diamond” I shoved her back to get to the front and didn’t let her back in.

Anyways back to the important stuff, Stick to Your Guns had an amazing set, playing tracks from their new album and older stuff as well. They even took the time to talk about the ISIS attacks in Paris, and to spread awareness. That is one thing I love about this band. They advocate for so many causes and are just genuinely awesome people. If you ever get the chance to see them live, do it, I promise you will not regret it.

Last up was the headlining band, Blessthefall, a metalcore band from Phoenix, Arizona. The majority of the crowd was also there to see them. Even though I am not a fan, they were able to keep the energy up after

Stick to Your Gun‘s set and keep the crowd pleased. They have a great stage presence, and you can tell they really care about the music. There was lots of crowd surfing and an abundance of fan girls freaking out.

Overall it was a decent show, I only really went to see Stick to Your Gun but it is always cool to be exposed to new genres of music and different bands.