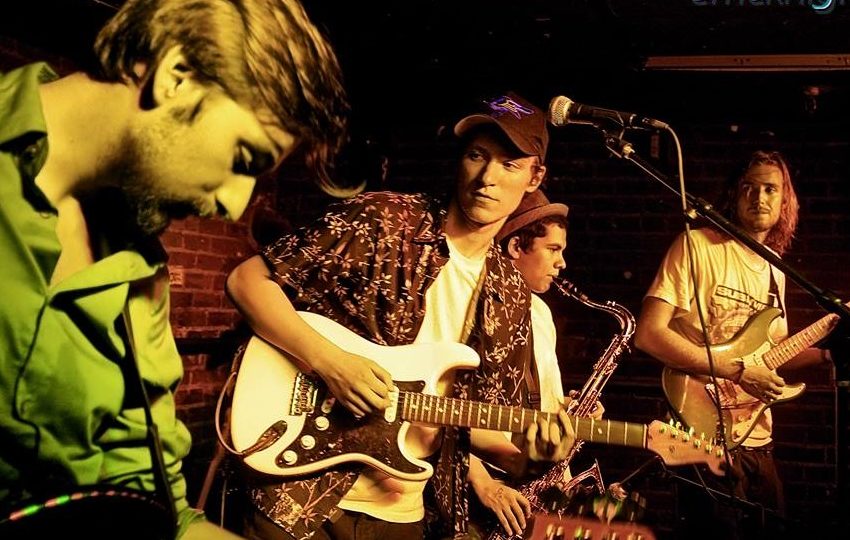 Fire Sale is a band hailing from Davenport, Iowa. Featuring a wide range of sounds and styles, they’re the type of band you’d be forgiven for not knowing, but should definitely be on your radar. Their newest release Furry Noises will motivate you to keep your ear to the ground for any news of upcoming gigs. The band has played various Iowa City venues before, and have tromped throughout Iowa with their signature blend of reggae, funk, and rock.

The album begins with an upbeat track, and one of my personal favorites, “Don’t Ya”. The song is the perfect introduction to the band, and gives you an immediate sample of their sound. It begins with short, tight guitar riffing that breaks into the groove of the song, showcasing the various layers of instruments. The drums, bass, guitar, vocals, and horns all harmonize together perfectly, each with their own distinct riffs that meld seamlessly into the groove. Like The Commitments playing Coachella, the soulful horns trade solos with the guitars, much like a live jazz band. The focus of the music is definitely on the instrumentals, which is reflected in the song lengths. Most songs hover around the 5-6 minute mark, allowing plenty of time for the groove to breathe and grow as the songs go on.

The album then moves on to “Roads”, a slightly more relaxed and groovy beat. I was immediately reminded of the classic 70’s era blaxploitation film soundtracks by the wah-ing guitar tones. The band shows off their versatility with quick rap-like vocals that turn on a dime into slow and sexy breakdowns.

As the album progresses, different instruments take center stage on different songs. In “Keep in Touch”, Brady Stender’s saxes interplay perfectly, resulting in a complex and rich sound that never goes overboard or becomes distracting. In “Us or Them”, Max Lipnick and Colton Menke’s guitar work creates a Latin pop-esque feel with hints of Santana rock. “Stay” has an unmistakable reggae feel. The focused vocals give it the most traditionally pop sound on the album, making it the easiest to listen to. “Hot Damn Jam” follows it up in the exact opposite way with Joe Verstraete’s percussion work leading the instrumental jam.

While the lyrics are never the main focus of the music, there are definitely some songs with that have unique lyrical content. “Technology” features a more rigid, slow beat complemented by a bluesy vocal deliverance. This old school feel contrasts with the lyrics, which focus on modern technology. Lines like “no need for emotion, all I gotta do is hit send” and “She hopes there’s wi-fi in this afterlife” create an interesting dichotomy. Another favorite is “Edison Invented the Night Life”, which focuses on the life and work of Thomas Edison. Set to a more honkey tonk beat, the lines mention the famous inventor’s various accomplishments and tireless work ethic.

Overall, I really enjoyed this album. Fire Sale sound like real pros, and I feel like I’ve found my new favorite band from a summer festival. You can tell these guys are killer live performers. I certainly hope to catch them someday soon. The instrumental focus and long song length may not be for everyone’s personal listening taste, but Furry Noises is perfect for a chill dance party or a summertime BBQ.

You can download Furry Noises for free, or a name-your-price donation, at their bandcamp page.

Check out the album below: