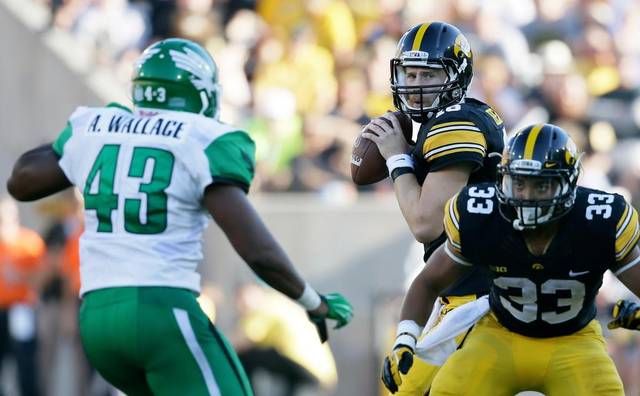 IOWA CITY, Iowa- The return of North Texas coach Dan McCarney and Andrew McNulty, both Iowa City natives, were one of the only positive things the Mean Green had going for them inside Kinnick Stadium on Saturday.

Iowa scored early and often behind the arm of CJ Beathard, as well as the legs of Jordan Canzeri in the 62-16 win over the Mean Green. The Hawkeyes finished the non-conference portion of their schedule with a 4-0 record for the first time since 2009. That season ended in an Orange Bowl victory over Georgia Tech.

Jordan Canzeri got things going for Iowa offensively with touchdown runs of 16 and 10 yards in the first quarter to give Iowa a quick 14-0 lead. He added another touchdown on the ground in the second quarter, as well as one in the third quarter. He is the first Iowa running back since Shonn Greene in 2008 against Wisconsin to score four rushing touchdowns in a game.

“We know teams are going to load the box when we run it and with a line that blocks they way they do, it’s awesome having all eleven guys work the way we are,” Canzeri said after the game.

Canzeri’s counterpart, quarterback CJ Beathard, looked as poised as he ever has before in a Hawkeye uniform. He completed his first 15 passes on the day, including two deep touchdowns. His first connection was to a wide open George Kittle for a 43-yard scamper along the North Texas sideline. It was Kittle’s first touchdown as an Iowa Hawkeye.

Beathard’s second touchdown came courtesy of a beautifully thrown deep ball to Tevaun Smith, who finished with 115 yards on 4 catches, on an 81-yard catch and run.

“The line was providing good protection all day so it was easy to pick apart the defense,” Beathard said.

The junior signal caller finished the game completing 18 of his 21 passes for 278 yards and the 2 touchdowns.

Coach Kirk Ferentz was pleased overall with his team’s performance, despite some mistakes that led to points for North Texas.

“It was another positive step for our team, and to end September 4-0 is a great feeling,” Ferentz said.

“You don’t want to mess around with self-inflicted wounds too much, but the guys have responded well,” Ferentz remarked about the two fumbles that led to 10 Mean Green points.

The Hawkeye offense was not the only unit putting points on the board in bunches on Saturday.

Iowa had two interceptions of North Texas quarterback Andrew McNulty ran back for touchdowns. First, Josey Jewell had a 34-yard touchdown late in the third quarter. It was the first interception and touchdown for the Decorah, IA, native.

“I was going through pre snap things, and I faded in a little bit and the quarterback threw out and I got there and hoped nobody got me,” Jewell said.

Bo Bower added a touchdown of his own late in the fourth quarter on an 88-yard catch and return for the Hawkeyes.

The special teams unit for Iowa also had quite the productive day at the office. Desmond King accumulated 71 yards on 2 punt returns, as well as 109 yards on 4 kickoff returns. The only blunder for the special teams unit was a missed PAT by Marshall Koehn after the Josey Jewell touchdown. It was the first time in 59 games Iowa missed a PAT.

“My thought there would be to rather have it happen in the third quarter today than the end of the game last week,” Ferentz said.

“So we’ll make a trade on that one,” Ferentz added.

The Hawkeyes travel to Wisconsin next Saturday to take on the Badgers. Kickoff is set for 11:00 A.M. from Camp Randall Stadium. We will have the call on KRUI with coverage starting at about 10:45.