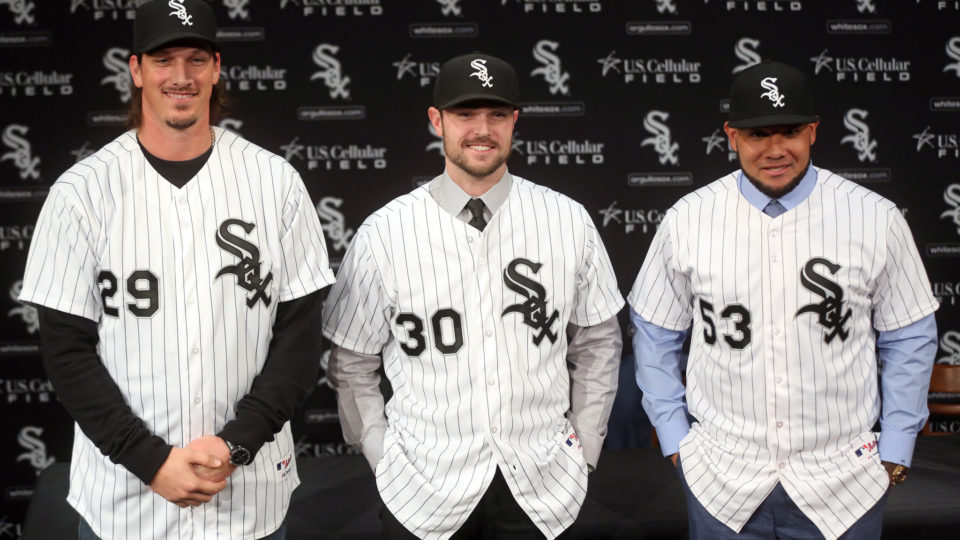 The Chicago White Sox and GM Rick Hahn entered the offseason with a lot of money and a lot of holes to spend it on.

After finishing with 99 losses in 2013, Hahn started his rebuild by acquiring one of Detroits top prospects, right fielder Avisail Garcia, and opening up some cap space by dealing Jake Peavy.

More big contracts including Alex Rios, Adam Dunn, and Paul Konerko were cleared from the books and the gears to Hahn’s plan were in motion.

The next steps consisted of signing the 2014 AL ROY Jose Abreu and trading for prototypical leadoff man and center fielder Adam Eaton.

Expectations for the 2014 season were not high, as it was seen as just a stepping-stone for bigger things to come. Though young and exciting, the ’14 squad was also a frustrating group to watch thanks to a bullpen that was not invested in and a couple key injuries to guys like Nate Jones and Matt Lindstrom which left manager Robin Ventura with slim pickings.

Those injuries, however, forced youngsters like Jake Petricka, 26, and Zach Putnam, 27, to pick up the slack which they did… and then some. Petricka finished the year with a 2.96 ERA and 14 saves in 18 opportunities while Putnam was the proud owner of a 1.98 ERA in 54.2 IP.

Although they finished with 89 losses, the MVP caliber season from Abreu, another CY Young worthy performance from Sale, the continued progression of hurler Jose Quintana, the emergence of Conor Gillaspie at third base, the presence of a real leadoff man for the first time since Scott Podsednik in Adam Eaton, combined with an All-Star season from maybe the best SS in the AL, Alexei Ramirez, gave Hahn and the White Sox the feeling that they were closer to contending than people realized.

This confidence, along with the owner Jerry Reinsdorf’s willingness break the piggy bank, allowed the Sox to tackle some big necessities. Hahn’s shopping list was made up of a Right handed starter to slot between Sale and Quintana, a lefty power bat, left fielder, and a bullpen renovation.

Hahn wasted no time getting started, and signed 1b/DH Adam LaRoche in late November. Not only will his bat take some pressure off Abreu, the Gold-Glover will also be able to spell Abreu at first when needed.

The 35 year old batted .259 with 26 long ones, 92 driven in, and a .362 OBP in 2014 with the Nationals and will bring a nice veteran presence to the clubhouse after the retirement of Paul Konerko.

The LaRoche signing was just the beginning. Next to bolster a rotation that had two great pieces in place with Sale and Quintana but fell off from there. Hahn worked his magic once again and without giving up any major prospects acquired Jeff Samardzija. Now with a three-headed monster at the top of the rotation and the possible call up of Carlos Rodon who is said to be the best lefty drafted since David Price the Sox rotation is looking “Very nice. Very nice.”

Next was the bullpen. Disastrous in 2014, the Sox ranked last in nearly every category and blew 21 saves. So what does Rick Hahn do? He goes and brings in Zach Duke, a lefty specialist who had the best season of his career last year and then on the same night he gets Samardzija he shocks everyone and signs David Robertson.

David Robertson is the guy who was given the task of replacing the greatest closer of all-time, Mariano Rivera, in the dog-eat-dog city of New York. None of this seemed to faze Robertson as he posted a 3.08 ERA and converted 39 of his 44 save attempts.

With those two additions, the signing of Dan Jennings from Miami, the emergence of Putnam and Petricka, and the possible return to dominance of Jesse Crain, who signed with the team in January, and Nate Jones, a once depleted Pale-Hose bullpen now looks fairly deep and reliable

Last was the gaping whole in left field. Another position where the Sox had been experimenting for a while. The platoon of Alejandro De Aza and Dayan Viciedo surely hadn’t been the answer a year prior as the Sox ended up DFA’ing De Aza towards the end of ’14 and Viciedo this offseason.

The aggressive moves Hahn made early had paid off and caught the attention of Melky Cabrera as he turned down a four year offer from an unannounced team to accept the White Sox three-year $42 million contract.

With all those moves including the constructing of a super bench with utility man Emilio Bonifacio, defensive specialist Gordon Beckham, and a dependable backup at catcher in Geovany Soto the Sox are sitting in the catbird seat.

As Detroit’s championship window closes and after the Royals failed to make any moves of big impact this offseason, and the Indians being, well, the Indians, it’s time for the Hahn Dynasty to start conquering the Central.