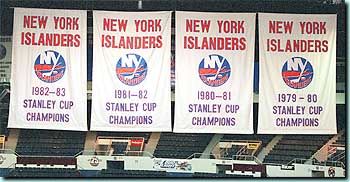 The old cliche in sports is that the highs are the highest and the lows are the lowest. For the New York Islanders, that could not be any more true. This is a franchise that won a Stanley Cup within the first seven years of existence…and then won three more in a row. For those scoring at home, that’s 19 consecutive playoff series wins, a record that Gretzky’s Oilers couldn’t even touch.

The Islanders are one of the greatest dynasties to be overlooked because they reigned just before (and it so happens, dethroned for a fifth Cup by) Wayne Gretzky, Mark Messier, and the 1980s Edmonton Oilers. Tough luck.

Since the beginning of the 1990s, the Islanders have made it past the first round once, had a penniless billionaire purchase the franchise, and are having to move the Barclays Center in Brooklyn after this season.

The aftermath of the lockout season of the 2004-2005 season has not been kind to the Islanders. They have made the playoffs twice and finished last in their division six times. It looked like the Islanders would slink out of town and close the “barn” (Nassau Veterans Memorial Coliseum) without much fanfare. A healthy John Tavares and a shrewd general manager have flipped the script (at least so far).

If the Islanders win the Cup this season,October 4, 2014 will be the day that set it all in motion. General Manager Garth Snow saw two teams with salary cap issues (Chicago Blackhawks, Boston Bruins) and struck a deal to get two high-quality defensemen in Johnny Boychuk and Nick Leddy.

How important have these two been for the Islanders? Leddy has already tied his career high for goal and is a +13. Boychuk surpassed his career high in points in only half a season. Not bad contributions for an offense that has gone from 17th to 4th in goals per game. Oh yeah, both guys also bring Stanley Cup rings with them.

Of course, having John Tavares come back healthy after suffering a season ending knee injury in Sochi last spring has been huge for the Islanders. He and linemate Kyle Okposo have combined for 38 goals and will be the driving force of a deep playoff run.

Between the pipes, Snow picked up Jaroslav Halak as the goalie was on a non-stop carasoul after the Blues traded for Ryan Miller at last season’s trade deadline. Halak has been serviceable, but helped by an offense averaging 3 goals per game.

The Islanders appear to be a lock for the playoffs and are currently in a tough battle with Pittsburgh and Washington to win the  Metropolitan. However, there are still some major concerns moving forward as look to clinch a division title for the first time since the 1987-88 season and make a deep playoff run.

Okposo is out for at least the next 4-6 weeks after having to get surgery on his left retina, Leddy has been the only defenseman to play every game this season, the team is dead last in the penalty kill, and the Eastern Conference looks deeper than it has been in a long time.

It would not be shocking to see the Islanders try to acquire a defenseman or two at the trade deadline and maybe even kick the tires on another goalie.

With the new playoff formatting,winning the division would guarantee the Islanders home-ice advantage in the first two rounds. No team would want to travel to the barn with a fan base that is getting its last hurrah with a legitimate title contender.

Let’s face it, the Islanders are not a perfect team. It is incredibly hard to win it all without a dominant penalty kill. The overall defense should be a concern and they are the 7th youngest team in the league.

That being said, raising the Cup one last time in front of a raucous Nassau Coliseum crowd before moving to the house that Jay Z built would be the perfect bittersweet sports cliche.