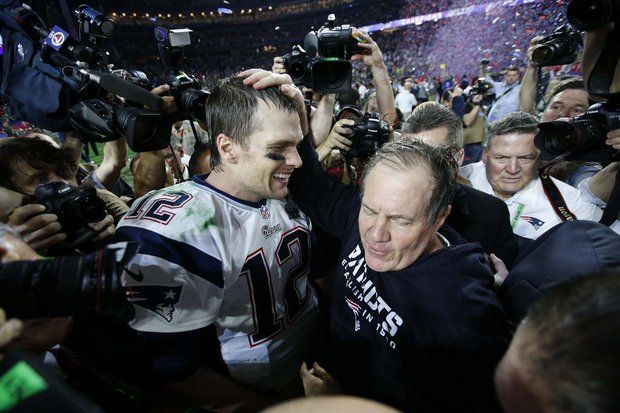 “I’ve seen this movie before,” I grumbled when the clock stopped with 1:55 remaining in Super Bowl XLIX.

Sure this time it was the Seahawks, and sure the Patriots were wearing white, but when Marshawn Lynch raced passed Jamie Collins and into the New England side of the 50, I was back in a Giant nightmare.

The nightmare of what could have been. The flawed pursuit of perfection, or the win for Myra Kraft that never materialized, both ripped away in the waning moments on the game’s biggest stage.

In each of the previous five Super Bowl trips for Tom Brady and Bill Belichick, the Patriots allowed a fourth-quarter touchdown with less than two minutes remaining in the game.

Lynch was about to make it six for six.

Russell Wilson set up the inevitable with a pass to the near sideline that simultaneously drifted into Jermaine Kearse’s lap while once again bringing Patriots fans to their knees.

After a Lynch rumble to the one yard line, I am certain I will never understand Seattle’s justification for their next—and last—offensive play-call. Malcolm Butler’s incredible break on the ball, like the incomplete pass against the Raiders or Adam Vinatieri’s right foot, will endure forever.

When accepting his fourth Vince Lombardi Trophy, Owner Robert Kraft compared this championship to his first, putting the latest triumph in the same breath as one of the great Super Bowl upsets 13 years prior.

In this Super Bowl, there was more on the line.

For two weeks leading up to the world’s biggest stage, nearly every media outlet in America poked their gauges into Foxboro footballs. Former players and respected journalists took turns sawing at the roots of the Patriots dynasty, delegitimizing all New England has accomplished in the last decade and a half.

This came four months after the 2-2 Patriots crawled to October, humiliated on national television with an ordinary, 37-year old quarterback and a roster full of gaping holes. Not even in the aftermath of the 2009 Wild Card shellacking against Baltimore did anyone around Foxboro feel the 4th ring was further from their grasp than when they awoke on October 1st.

Yet somehow, on February 1st the confetti at season’s end rained Patriot red and blue.

The craziest thought in the aftermath of the most watched television program in history is how our memory of Tom Brady and Bill Belichick’s Patriots came down to that last yard.

A yard away from seeing “Kearse’s Katch” as another representation of supernatural influence in football games. Three feet from a third straight Super Bowl loss, all coming since Brady’s prime began, or 36 inches from three straight defensive letdowns at the end, regardless of the new personnel fortifying this New England secondary.

A friend asked me in the aftermath of the Red Sox Championship in 2013 if I had gotten used to all this winning, if the celebrations lack the luster they once did. He wanted to get a grasp of what it felt like winning a championship for the eighth time in my lifetime.

It is like your favorite movie, I said. You have seen it a few times, so while watching again, there is a sense of how you will feel at the end, but you never really know until you get there.

With the seconds ticking away in Super Bowl XLIX, and with Seattle a yard away from victory, I had a sense of what I was going to feel in the imminent end.

Little did I know I was about to watch something that for the last decade has only existed on DVD.