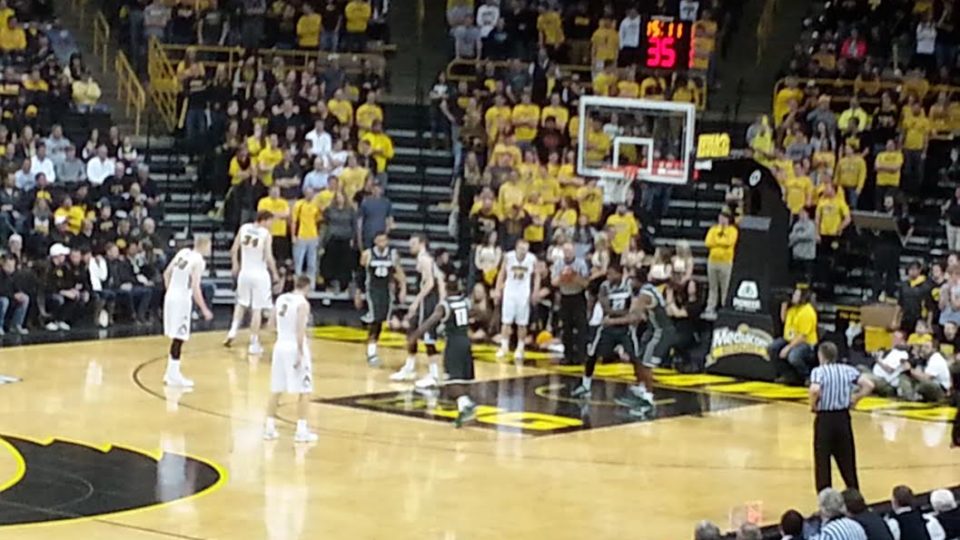 The night for Iowa Hawkeyes (11-5, 9-2) as the Hawkeyes went into halftime with a 39-28 lead. Iowa senior Gabe Olaseni provided a spark off the bench as he scored 15 first-half points going 7-7 from the free throw line. The Hawkeyes went 12-14 from the free throw line in the first half. However, the Hawkeyes were unable to match their strong first half performance as they were limited to 22 second half points and shot just 3-10 from the line. Hawkeye junior Jarrod Uthoff recorded a double-double with 12 points and 10 rebounds.

“[Michigan State] got some energy from the fact that they were playing good defense,” Hawkeyes coach Fran McCaffery said. “The disappointing thing is whenever you play a team, you hope you can do a better job on their good players. They have three elite guys and that’s who hurts us. That’s disappointing.”

However, Michigan State (11-5, 2-1) had a strong second half response as they erased an 11-point deficit, silencing the crowd inside Carver-Hawkeye Arena.

The Spartans displayed a three point barrage shooting 8-9 from behind the arc in the second half.

21 of Trice’s 25 points came off three point shots. Trice shot 3-4 in the first half and 4-4 in the second half from behind the arc. Adding into the mix was junior guard Denzel Valentine with 18 points and Branden Dawson who recorded a double-double with 14 points and 15 rebounds.

“Give Iowa credit they took it to us after the first six or seven minutes of the game,” Spartans head coach Tom Izzo said. “We feel very fortunate to beat this team on the road under the circumstances.”

The Iowa Hawkeyes will four days to prepare for the Minnesota Golden Gophers on Tuesday, January 13 in Minneapolis. The Gophers will travel to Ann Arbor to face the Michigan Wolverines on Saturday, January 10 before hosting the Hawkeyes.