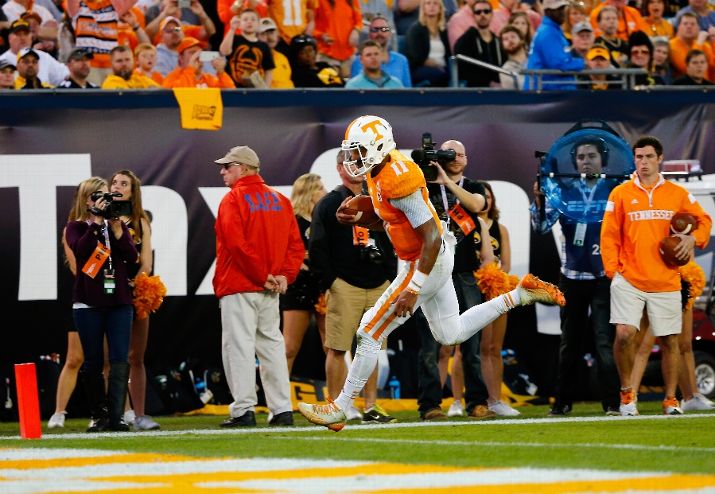 With 1:44 left in the first quarter, Dillon Kidd shanked a punt that set Tennessee up on the Iowa 49 yard line. On the ensuing play, Marlin Lane found Vic Wharton on a trick play that put Tennessee up 21-0 and the Volunteers never looked back en route to a blowout much bigger than the scoreboard indicated.

“I think they both did some good things,” Ferentz said. “They both had some down play, too. The way the game got away early, it’s tough to evaluate anything in a real great fashion.”

Iowa finished the first half with the quarterbacks going a combined 6-15. Left tackle Brandon Scherff stated that the back and forth at the position seemed to give the team an advantage.

“C.J. is more of a runner and he is not afraid to sling the ball, so they had to prepare for that as well.” Scherff said.

Tennessee scored touchdowns on five of its first six possessions.

“We weren’t wrapping up like usual but [give] credit to them, they broke the tackles,” linebacker Josey Jewell said. “We knew they were going to be fast. [We] need to be able to fill holes and pursue the ball better.”

Jewell was named Iowa’s MVP for the game after amassing seven solo tackles and 10.5 total tackles.

One of the surprising positives for the Hawkeyes was the 122-yard evening for running back Jordan Canzeri. After the game, Canzeri admitted he still wasn’t 100 percent healthy in this game but will work to get there.

“I made the statement that he hasn’t really been right this whole season dating back to August,” Ferentz said. “It was a positive he ran as well as he did. We’ve got to keep him healthy and moving

Receiver Kevonte Martin-Manley came into the game three receptions short of breaking Derrell Johnson-Koulianos’s career reception record. He got  all that he needed in order to establish the new record of 174.

“When we got down by so much, I thought about the positive that could come from it,” Martin-Manley said. “I was just fortunate, but it was a long time coming. All the games before [led to this]. I am very happy I was able to accomplish this.”

For Iowa, this loss is the culmination of what should be deemed a failed season. Iowa started the season with talks of an easy schedule and a potential berth in the Big Ten Championship game. After dropping four of its final five games, there are a lot of questions to answer before Iowa hosts the Illinois State Redbirds on September 5.