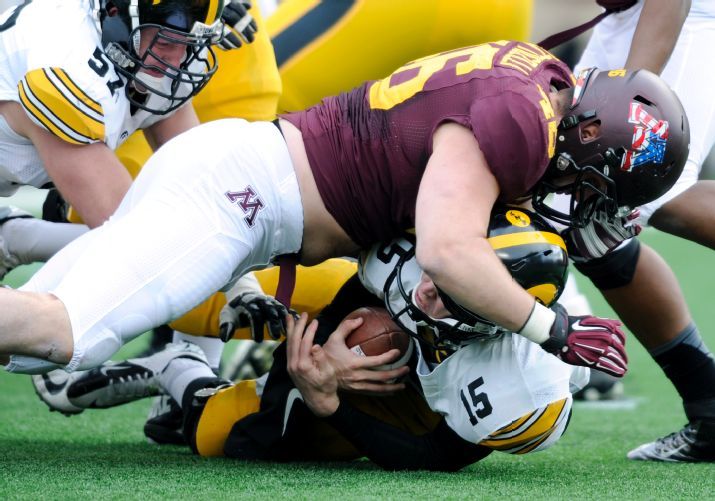 The offense, after going down the field for 76 yards and a touchdown on the opening drive, was held to just 205 yards and could not get anything going against the Golden Gophers defense.

Iowa sought to take advantage of a Gopher defense that was giving up 144 yards per game by running Mark Weisman early. He had Iowa’s only touchdown on the afternoon but only averaged 1.5 yards per carry and was held to 23 yards.

Getting Weisman more carries has been a focal point of the Iowa offense, but this week there was just nothing going. Head Coach Kirk Ferentz credited Minnesota for not allowing the Hawkeyes run game to get off the ground.

Quarterback Jake Rudock looked sharp on the first drive, completing three passes of 15+ yards. Iowa’s second drive ended with a Rudock interception and the offense could not get back on track following that turnover.

Iowa would turn the ball over twice more courtesy of fumbles by Rudock and freshman Akrum Wadley. Minnesota turned Rudock’s fumble into a touchdown that gave Minnesota the 28-7 lead.

The offensive line was manhandled by the Minnesota defense. Minnesota had eight tackles for loss totaling 28 yards including four sacks. Lineman Brandon Scherff boiled the loss down to the Gophers being more physical from the start.

“They were ready to play and they stopped the run on us,” Scherff said. “We want to be the most physical team but we weren’t today.”

After that first possession, Iowa’s longest drive was five plays (until the last garbage time passion that went nine plays) and its average possession was 1:33. Rudock said that nothing changed after the first drive.

“They just kept playing their style of football,” Rudock said. “We could not handle it.”

One week after going off for 483 yards and looking like the offense had finally clicked. Iowa gain 76 on its first possession and 81 on its last, but was held to just 60 in between.

The Gophers held Rudock to 10 of 19 and 86 yards before being replaced by C.J. Beathard early in the fourth quarter. The running game was held to 86 total yards after rushing for 221 yards in the win over Northwestern.

“We didn’t play well today,” Rudock said. “They did, we didn’t. We got what we deserved, it’s that simple.”

Iowa is now forced to answer question about consistency heading into the final three games of the regular season. Even with the loss, Iowa is still in contention for the Big Ten West title but will have to win out and get some help.

Iowa travels to Champaign next Saturday to take on the Fighting Illini.