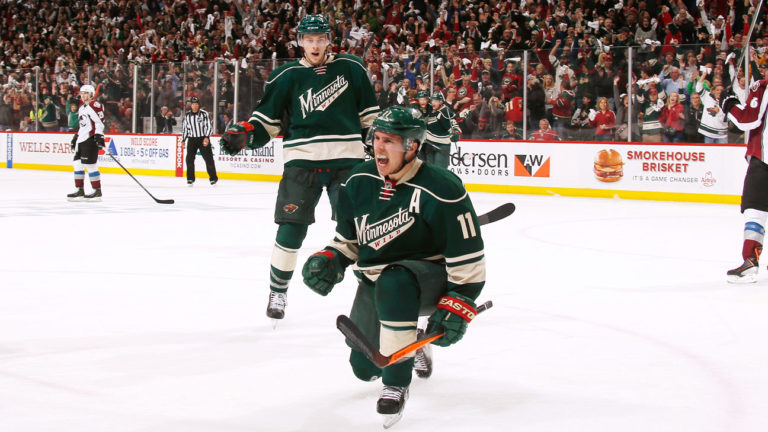 The “State of Hockey” is once again living up to its name.

A fast start has Minnesota Wild fans pondering the possible upside that this team may build up to.

The Wild are trying to build off of two consecutive playoff appearances, including advancing to the Western Conference semifinals a year ago defeating the Colorado Avalanche before falling to the Chicago Blackhawks in six games.

Head coach Mike Yeo has a nice blend of youth and veteran talent ready to pounce in the best division in hockey. Hockey buffs will know that this team is not all about Zach Parise and Ryan Suter, the two lucrative free agents who came to Minnesota in the summer of 2012.

Along with the veterans Parise and Suter, the Wild have their captain of many years, Mikku Koivu, Jason Pominville, and they also brought veteran sharpshooter Thomas Vanek on board for this season.

Vanek had spent the majority of his time with the Buffalo Sabres from 2005-2014. After quick pit stops with the New York Islanders and the Montreal Canadians, the former Minnesota Golden Gopher returned to his college roots in the land of 10,000 lakes.

He has played on the second and third lines for Minnesota, totaling one goal and seven assists in right games. Look for him to pick up the point scoring pace and become an integral part of the Wild power play, which has struggled mightily through the first eleven games.

Despite the struggles on the power play, the Wild are near the top in many of the major statistical categories, including goals scored, goals allowed, and the penalty kill.

Entering play Thursday, the Wild are 7-4 through their first 11 games. They have already scored 35 goals in the young season, which is good for fourth in the league. Minnesota is also one of the most stingiest defensive teams in the NHL, only allowing 20 goals good for second in the league.

However, perhaps the biggest reason the Wild have had success the past few seasons has been the play of their youngsters. Minnesota has 11 total players on their roster under the age of 25, and many of them are playing key roles on offense, defense, and between the pipes.

Minnesota has already locked up some of their most prized young prospects in defenseman Jonas Brodin, center Charlie Coyle, and goalie Darcy Kuemper to multi-year deals. Other young Wild players including Mikael Granlund, Jared Spurgeon, and Nino Niederreiter will be due for big paydays of their own very soon as well.

This team has shown that it has the firepower to compete with the deepest and most talented teams in hockey. Xcel Energy Center has become one of the best venues in the entire league with thousands of loyal Wild fans filling it to capacity every game. If things continue to trend upwards for Minnesota, the “State of Hockey” could be raising Lord Stanley’s Cup sooner rather than later.