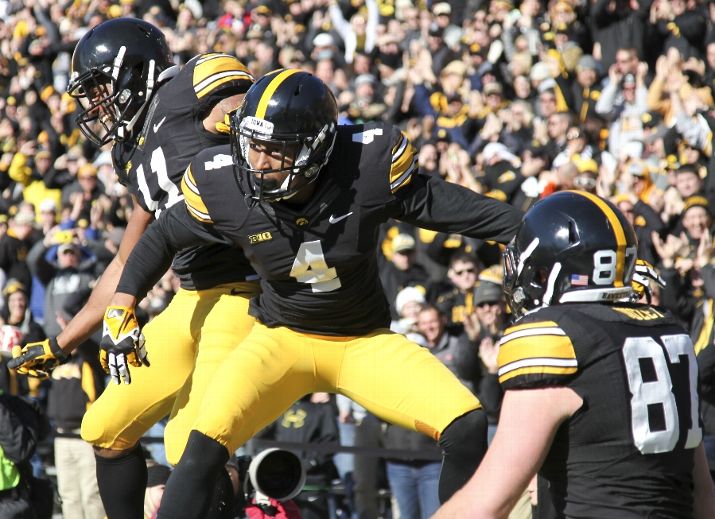 Iowa dominated this game from start to finish. The offense and defense were clicking in-sync. Kinnick was rockin’ with 66,887 in attendance supporting ANF. (America needs farmers)

The Hawks played with drive and passion after their bye week and eliminated the bad taste in their mouths from the Maryland game, routing the Northwestern Wildcats 48-7.

Jonathan Parker started the game off with a bang on a 54 yard kickoff capped off with a 15 yard penalty, putting Iowa in business right away. Iowa would convert that drive into early points courtesy of the first of three touchdowns Mark Weisman scored on the afternoon.

Iowa refused to take its foot off the pedal after blowing an early 14-0 lead in Maryland. Weisman rumbled in again breaking a tackle from 14 yards out to put the Hawks up 17-0 with 5:28 left.  Weisman recorded his fifth consecutive multi-touchdown game.

Both teams struggled with special teams early in the game.

With 3:39 left in the first, Northwestern was forced to punt deep in its own territory. Ben Niemann rushed off the edge, got an arm on the ball, and then was able to trot the whole one yard for a touchdown. Ferentz said, “Just a good effort for him. Good to see young guy like that make a nice play.”

Iowa was not immune to bad special teams play itself. Late in the first half, Iowa was forced to punt and had its own mishap. The snap was high, Connor Kornbrath couldn’t hang on to it, and Iowa took a 20 yard loss giving Northwestern the ball at Iowa’s 18 yard line.

Two plays into the second quarter, Justin Jackson took advantage and put up Northwestern’s only points of the afternoon.

The surprise of the day was Akrum Wadley the leading rusher of the day with 106 yards and one touchdown averaging 7.1 yards per carry. His quickness was a nice compliment to Weisman brute strength making him hard to tackle.

The offense had 483 total yards lead by Ruddock 12-19 239 passing effort with one touchdown. Weisman had 94 yards on 20 carries and three touchdowns. Beathard came in and scrambled for 23 yards while going 5-6 with 23 yards. The receivers had a nice day with Matt VandeBerg leading the way with 5 catches for 90 yards. Tevaun Smith had 4 catches for 76 yards and one touchdown.  Martin-Manley had 3 catches for 66 yards.

The defense was outstanding. They forced 8 punts, had one fumble recovery,  and five sacks (three by Trinca-Pasat, one by Drew Ott, one by Perry). The defensive line did a great job of getting pressure  and the secondary shut down the passing game helping hold Northwestern to 180 total yards.

Be sure to tune in  next Saturday as Iowa travels to Minnesota as the teams fight it out for the Floyd of Rosedale. Kickoff is set for 11 a.m.