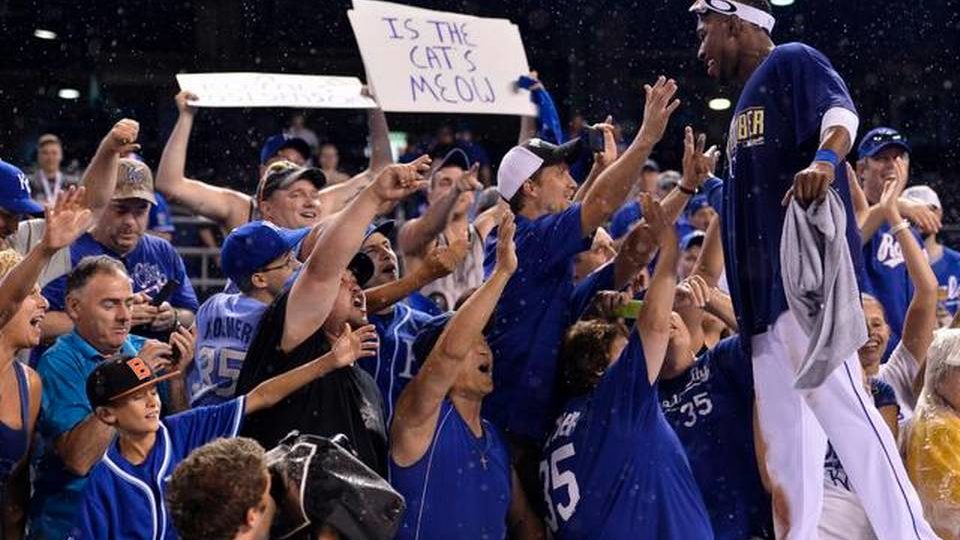 That’s exactly what I found myself repeating time and time again throughout Tuesday’s unbelievable sudden-death game between the Kansas City Royals and Oakland Athletics.

It was a tale of two lengthy stories in a do-or-die Wild Card game. First, the Royals and their “never say die” attitude fought from levels of obscurity to find themselves right in the midst of an American League Central Division title. While not garnering the division lead after a brutal 162-game schedule, they captured a playoff berth and the eyes of baseball nation. The Cinderella of baseball went up against, well, the once-Cinderella of baseball.

Oh, the Oakland Athletics: the featured team in “Moneyball” that made Billy Beane quite possibly the most well-known general manager in sports. While the tactics featured in the film got them into the playoffs with a salary well below the likes of the AL West superpower Los Angeles Angels, it wasn’t a winning strategy in the playoffs. So what did Beane do? He went completely out of his typical mind and traded his top prospect and best power bat to acquire exceptional rotation additions in Jeff Samardzija, Jason Hammel and Jon Lester.

Before that trade the A’s had the best record in baseball. Since? They’ve lot 30 of 46 and stumbled into the postseason, struggling to regain the same outstanding lineup composition that had them as World Series contenders.

Two different roads lead to the same destination, one on the upswing and other trying to find theirs once more. But that isn’t the story, rather just the background. The story is how the Royals singlehandedly sparked baseball.

After not reaching the playoffs for 29 years, Kauffman Stadium in Kansas City was as electric as any stadium I’ve ever seen, and I watched the Kansas City Chiefs break the stadium sound record across the street just a night earlier.

Fans, dressed fully in blue, were never out of the equation, even when trailing on three different accounts. Their resilience matched the team – one of small ball, never giving up and a blue-collar attitude. The fan base represented their team just as well as the team played for its fans.

And through our televisions we witnessed the beauty and perfection of sport combined with a flawless relationship between athletes and fans. Never were the Royals out of it – not following a two-run, opening-inning deficit, not when down four runs with a seasoned playoff ace, Lester, staring them down on the mound, and not even when The A’s took a one-run advantage in the top half of the 12th inning. The fans never stopped cheering, and in turn the players never quit performing.

And as neither a fan of the Royals or Athletics, I feasted on it – and I know others without an interest in the game did, too. Watching and not wanting the Royals to win seemed impossible, even against my preseason World Series pick. I’d rather be wrong than see those fans go home unhappy. This is how Kansas City sparked baseball.

They revealed what has been baseball’s appeal since it debuted well before my grandparents were born. Hard work, determination, teamwork, playing for the love of the game and simply doing whatever is necessary to pull victory from the jaws of defeat is so valued in a sport that has dwindled in popularity while trying to compete against the likes of the NFL, NBA, NHL and MLS in recent years. This can be shown by a singular play: a simple steal of third base.

Here’s the situation: bottom of the ninth, one out and a runner on second. Kansas City’s speedster Jarrod Dyson is on the base path, sitting in scoring position only because of a sacrifice bunt (what seemed like the 20th of the night for Kansas City’s small ball attitude). With an out from the sacrifice, the Royals have two choices: Either 1) With Norichika Aoki and Lorenzo Cain the next two batters, let them swing and hope for a single to the outfield to tie the game, or even better walk-off or 2) Throw all the chips on the table and do what you’ve done all year by attempting an incredibly gutsy steal of third.

They chose option two, not jumping off the methods that got them to this point, such as their counterparts did during mid-season. It worked.

Dyson darted to third and slid well through the bag, one of an MLB playoff-record seven steals for the Royals. Sure enough, Aoki hits a sacrifice fly and Cain lines out. Had they changed strategies now, Kansas City would have lost.

Long story short: The Royals give up a run in the top of the 12th, sure enough fight back once again, and win on a single off one of Oakland’s midseason acquisitions in Hammel.

Gatorade coolers were dumped, hugs shared to greet the winning run at home plate, and the crowd was as passionate as ever. The Royals showed what being an athlete and a fan is truly supposed to mean, where winning matters, but appreciation for maximum effort means even more.

And baseball provided something that football, basketball, hockey and soccer can’t. Something so unique to the sport, that it is also their downfall to many modern fans. The amount of time it took for this game to conclude was wonderful.

Every pitch made fans hold their breath, as everything could change from one swing of the bat, one fielding error – a passed ball, a steal, and all the other immense variables baseball provides. Every. Single. Pitch. The suspense was brutal – it was a literal nail biter as proof by my hands today. It was as stressful as game to watch as any, but I couldn’t take my eyes away. And remember, I’m not even a Royals fan.

Kauffman was rocking, and as a fan of a team that hasn’t been a winner since 1908, I thank Kansas City for showing me what that kind of passion looks like. Thank you, Kansas City, for being a Cinderella, blue-collar story that not only refused to go down without a fight, but refused to lose in general. Thank you, Kansas City, for showing anyone who questioned the intensity and immense passion that baseball can provide what the potential truly is. And thank you, Major League Baseball, for creating a one-game playoff with such immense pressure that these scenarios have the opportunity to come about.

The sudden death play-in game creates such a pressure-filled atmosphere that it makes baseball so much more appealing than its multiple seven-game bouts. After 162 games, to have it all come down to one game may seem unfair to some spectators, but it’s such an incredible concept. Imagine doing 162 days of classes, just to have the professor say “throw out all the homework, your grade comes down to tomorrow’s final test.” Yeah, that kind of pressure.

I hope you all got to experience to an extent what that Tuesday night game involved. Appreciate the pressure on both squads, the nerves they had to squander to perform and the show they put on.

But before I finish, remember what Kauffman looked like in that playoff atmosphere. Now imagine it’s Game Seven. Now move that game to Wrigley Field.