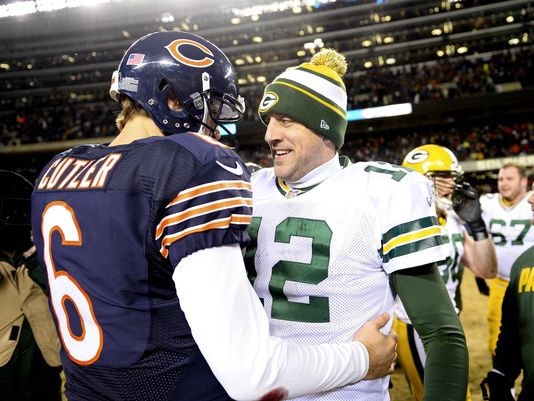 Yes, it’s only week 4 of the 2014 NFL season, and yes the Bears are sitting at 2-1 and a loss wouldn’t doom their season, but let’s face it, the time has come for the Bears to beat the Green Bay Packers.

Since joining the Chicago Bears in 2009, Jay Cutler has a record of 41-29 as the starting quarterback with 109 touchdown passes and 77 interceptions and a 60.2% completion rate.  However against the Packers, not only is Cutler 1-7, but his numbers are just as awful, with 10 touchdowns and 17 interceptions and a 55% completion rate.  The number one goal as quarterback of the Bears is to beat the Packers and Cutler simply hasn’t done it.

Make all the excuses possible, Cutler didn’t have good receivers, Cutler played with a terrible offensive line, Cutler was in his first year with so-and-so as the offensive coordinator, despite all of this, the Bears have consistently competed with the Packers for the division championship since Cutler got there, and one win against them in any of those seasons could’ve been the difference between the Bears watching the playoffs at home, or actually participating in the postseason.

This game is huge for many reasons.  For starters, a win would propel the Bears to 3-1 and would likely make them the favorites to win the division, while also moving the Packers to 1-3, but more importantly, 0-2 in division games.

Also, it would give the Bears confidence that they can beat an Aaron Rodgers-led Packers team.  The Bears beat the Packers last season, but Aaron Rodgers got hurt on the fourth play of the game, so basically he didn’t play.  Funny enough, you know who else wasn’t playing in that game?  Jay Cutler.

For the Bears to truly feel satisfied, the Bears not only have to win on Sunday, but Cutler has to play well.  If the Bears win and Cutler plays a game similar to the week 1 game against Buffalo (2 TD, 2 INT), there will still be doubts as to whether or not he can perform well against the Bears nemesis in the NFC North.

If Cutler truly has turned a corner in 2014 like many analysts as well as his buddy and star wide receiver Brandon Marshall believe, Cutler needs to carry his team to a victory against the Green Bay Packers.