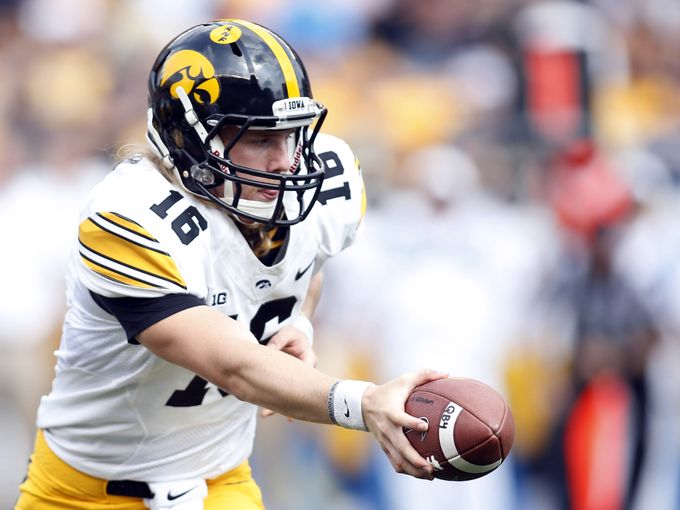 Pittsburgh – It was a tale of two halves and two quarterbacks for the Iowa Hawkeyes as it gets the comeback win 24-20 in Pittsburgh thanks to the strong play of Quarterback C.J. Beathard.

Beathard came into the game in relief of an injured Jake Rudock to start the second half and led Iowa on a quick 3:18 touchdown drive that included a spectacular 62-yard pass to Damond Powell. Powell found redemption after aiding in an interception early in the game.

“[On that pass]I just needed to be determined to make that play, whether it was with one hand or two,” Powell said. “When your number is called you have to be able to make the play.”

Beathard set the tone for the rest of the game with that explosive play and credited Powell for making the catch. Powell only had the one reception but that one play set up the 10-yard Mark Weisman touchdown that cut Iowa’s deficit to 17-14.

“It was a great catch. Honestly, I thought I had overthrown him at first and then he made that one-handed grab,” Beathard said. “I saw him make a break and just put it where I thought he would be and he made the catch.”

Even without passing for a touchdown, Beathard led two touchdown drives and a third drive that ended with a 52-yard field goal by Marshall Koehn.

On just his third play in action, Beathard found Kevonte Martin-Manley for a 7-yard gain that got the Iowa offense rolling out of the half. The Iowa defense had just gotten a critical stop and Iowa was in need of points to keep itself in the game.

“Had we gone three and out, the game could have gone differently,” Beathard said. “It was a big play to get that drive started.”

Of course, when a backup comes into a game, there is a reason. Rudock looked to have been shaken up on his last play of the first half. Head Coach Kirk Ferentz did not seem to think the injury was too serious.

“Jake was injured there at the end of the first half,” Ferentz said. “We don’t expect it to be serious and he should be fine tomorrow.”

Ferentz was pleased with the way that Beathard played in relief. The team needed a boost on both sides of the ball and after looking lost in the first half, Beathard came in and answered the call.

“C.J. came in and did a great job and really led our team. We have confidence in both [quarterbacks] and know that we have two really good football players,” Ferentz said. “C.J. came in and made some really big plays.”

Beathard has had limited chances to get snaps during game time dating back to the start of the 2013 season. While he is not guaranteed to start next week, he knows he has to take advantage of the time he gets and just enjoy playing.

“It was fun to get out there and win a game, especially like that,” Beathard said. “Getting a few series in there and getting some rhythm was important. I just try and go out there and make the best of every opportunity I can.”