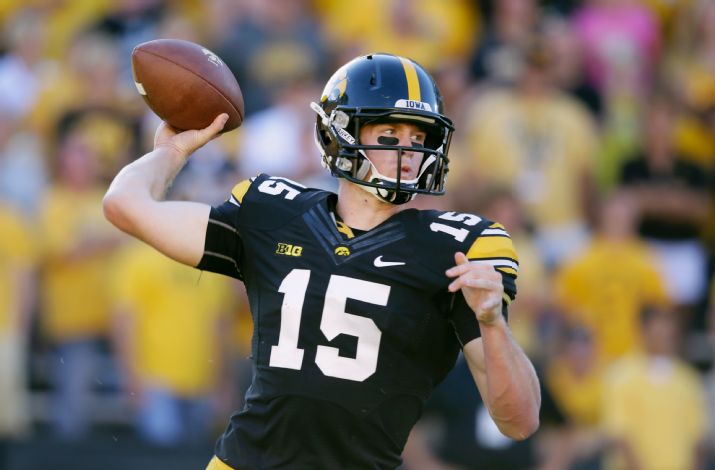 After an afternoon where the Iowa offense looked lethargic and it seemed a Mid-American Conference (MAC) team was about to claim a third straight victory in Iowa City, Jake Rudock rallied the Hawkeyes in the final three minutes for a 17-13 victory over the Ball State Cardinals.

For a program that has a history of pulling out late victories, this has to rank amongst the most improbable of them all with Jake Duzey scoring the winning touchdown with just a minute left on the clock. For freshman Derrick Willies, his first college touchdown was a major factor in this comeback.

“It was a great feeling of relief after what was a hard fought game,” Willies said. “I blacked out for a second[after catching the touchdown] but it was awesome.”

Rudock had a career day with 322 passing yards and 2 touchdowns. He was a calming presence in the huddle and stayed poised enough to lead his team to a win. Rudock attributes that leadership to the way he was raised and taught to play the game.

“I have been playing sports my whole life. It is never going to be perfect and bad things are going to happen,” Rudock said. “It was the way I was brought up with my parents and coaches that kept telling me that its not other and to work hard as long as there is a chance.”

In a surprising move, backup quarterback C.J. Beathard started the second series of the game and led the Hawkeyes in a drive that resulted in a missed field goal after a touchdown was overturned. Head Coach Kirk Ferentz said it was part of the game plan heading into this week.

“We never got to it last week.  It’s something we said we’re going to do,” Ferentz said. “We basically thought coming into thegame, we’d do second and third series with him and just see where it took us.”

The real trouble for Iowa started came early in the second quarter, as Joshua Parker fumbled the handoff on an end around and Blake Dueitt ran it back to give Ball State a 7-0 lead.

It was on that same play that left tackle Brandon Scherff went down with what appeared to be a leg, though he came back later in same quarter and played without restraint the rest of the game.

“I stood up [after the tackle] and my leg locked up and I didn’t know what happened and didn’t want to stress anything so I just went back down,” Scherff said.

Though Ferentz had some anxious moments in the aftermath of the injury. He was relieved that he was did not sustain a serious injury and impressed by the way that Scherff came back into the game and played.

“The good news is his knee was stable when they examined it.  He’s a really tough minded guy.  For him to come back and do what he did is a positive,” Ferentz said.

The offense continued to struggle until late in the 4th quarter when the team knew desperation time was upon it and the only choice was to go out and score.

“We knew that we needed to go down there and get a score but we couldn’t put all of our stock into scoring, we just had to worry about each play at a time,” Rudock said. “It was not too far out of reach and we always had a chance. We are grateful for what the defense did and holding [Ball State] to field goals when they did.”

Though it was a win, there are still some major concerns for the Hawkeyes going forward. Placekickers Marshall Koehn and Mick Ellis went a combined 1 for 4 on field goal attempts. A position that was a question mark heading into the season looks even murkier going forward.

“I’m glad that I was able to put one of them through to help the team but that was completely unacceptable,” Koehn said. “I am going to watch some film and hope to get better next week.”

Iowa has also had problems getting the running game going over the first two weeks of the season. Part of the problem has been finding the right number of carries for a roster that is uncharacteristically filled with healthy running backs. Ferentz stated that it was just good planning on Ball State’s part.

“They had an excellent game plan.  They did a really good job.  We didn’t establish anything really in that run game, especially in the first half,” Ferentz said. “We’re going to really have to look hard at that, but I thought we adjusted a little bit better in the third quarter.”

Iowa now sits at 2-0 and welcomes Iowa State next weekend for the annual Cy-Hawk rivalry game.