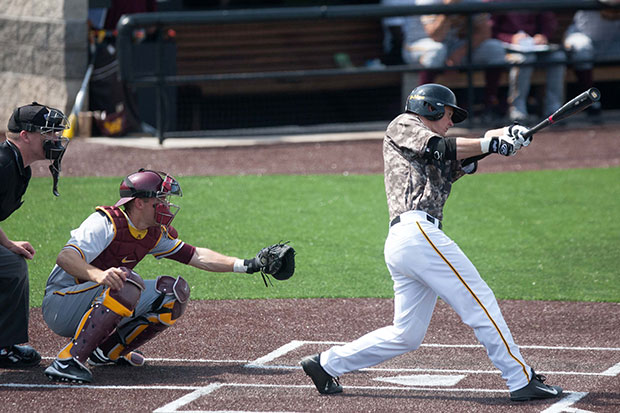 After losing Friday’s game against Minnesota on a crucial error in the ninth inning, the Iowa baseball team knew that Saturday’s game would be important to get back on track.

They let their bats do the talking. Down 5-0 entering the bottom of the second inning, Iowa scored 11 unanswered runs to take the second game of the series 11-5.

Sasha Kuebel had his struggles early on, but after giving up the five early runs he settled down beautifully and picked up his fifth win of the season. The southpaw allowed 5 runs on 10 hits in 7 innings. The five runs and seven of the ten hits Kuebel gave up were in the first two innings. After that, the Hawkeye pitcher allowed just three hits in his final four innings. Reliever Blake Hickman pitched an inning and two-thirds allowing 1 hit and 2 walks, but he struggled with his control in the ninth and that forced coach Rick Heller to go lefty Jared Mandel to get the last out of the game.

Sophomore catcher Jimmy Frankos, who went 4-5 and drove in 2 runs in the victory, led Iowa’s offense.

The Hawkeyes got on the board in the second inning courtesy of Jake Mangler after a pitch from Gopher starter Ben Meyer hit him to make it 5-1.

The fourth inning saw Iowa score their second run of the game on an RBI groundout from Mangler as he picked up his second RBI of the game to cut the deficit to three.

Next inning, Iowa put up their first crooked number of the game scoring and capitalized on some Minnesota miscues. Hawkeye shortstop Jake Yacinich led off the inning with a walk and advanced to second on an error by Gopher right fielder Jordan Smith. Another walk from Hawkeye right fielder Taylor Zeutenhorst loaded the bases for Iowa. Left fielder Kris Goodman grounded into a double play scoring Yacinich from third to make it 5-3 Gophers. The very next batter, Jimmy Frankos, lined a sharp single to center field scoring designated hitter Dan Potempa to put the Hawks only one run back.

The sixth inning, however, gave the Hawkeyes four huge runs to take an 8-5 lead over Minnesota. The onslaught started with a two run triple from Yacinich, who picked up his third and fourth RBI’s of the contest scoring first basemen Tyler Peyton and center fielder Eric Toole. Yacinich later came around to score on a sacrifice fly by Dan Potempa. Taylor Zeutenhorst concluded the run scoring in the sixth with a bang when he hit a 400-foot bomb to straight away center field for a solo home run. All four runs were charged to Gopher reliever Brian Glowicki.

Iowa added two more runs in the seventh inning, once again taking advantage of Gopher mistakes. An error by Minnesota third baseman Matt Fiedler off the bat of Jake Mangler allowed Jimmy Frankos to score from third base. Tyler Peyton then hit into a fielder’s choice scoring third baseman Nick Day to make the score 10-5 Hawkeyes.

The Hawkeyes scored their final run of Saturday’s contest on an RBI single from Jimmy Frankos scoring Taylor Zeutenhorst in the bottom of the eighth inning.

Coach Heller has to be pleased with the effort of his team over the weekend, which also saw Iowa take the series finale by a score of 7-6 on Sunday. He has injected new life into a program that desperately needed something to get back on its feet. With his track record, coach Heller will have this team being a contender in the Big Ten sooner rather than later.

Iowa will return to Duane Banks Field on Friday, April 25 against the South Dakota State Jackrabbits. Like the game this past Saturday, we will have the series opener live on 89.7 KRUI. First pitch is set for 6:00 P.M.