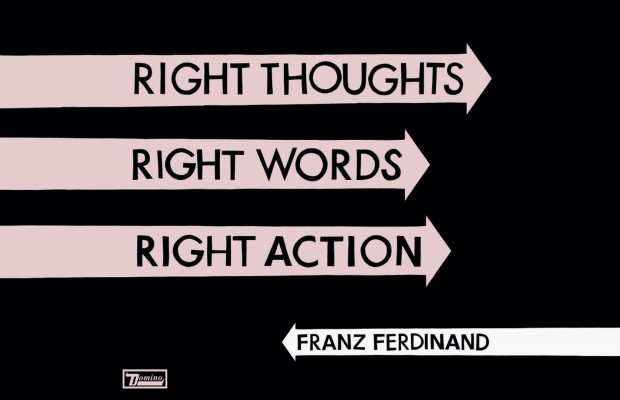 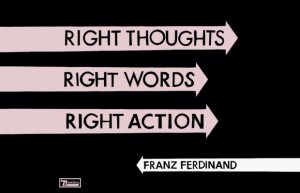 It’s been four years since the Scottish quartet put out an album and lead man Kapranos has the “right thought” producing this LP with the same playful drive that won listeners over back in 2004.

Franz Ferdinand continues to be a staple in the indie dance rock circuit, debuting their album on Conan, and Letterman, but to those who only recognize “Take Me Out”, you’re not out of luck. Their fourth album takes them back to basics and after a few listens you’ll catch yourself singing along.

“Right Thoughts Right Words Right Action” opens with playful guitar chucks, a funky bass line, and a drum beat that’s easy to clap along to. Besides being a bit too repetitive, it does a decent job at setting up the rest of the album.

The LP is full of sultry vocal slides and simple yet catchy lyrics with latent meanings. A chorus rings behind his sharp hooks and grungy  guitar. You’re taken on a ride that explores cheeky tunes masked in dynamic layers of electro trills (Treason! Animals.) and Beatles inspired licks (Fresh Strawberries).

“Love Illumination” is the first track that stands out on this LP with it’s cutting lyrics and guitars that slash through clicking cymbals and sliding harmonics. By the end of the track you’ll be singing along at the top of your lungs, well at least I sure was.

It’s followed up by “Stand On The Horizon”, which starts off with a soft hypnotic acoustic and vocals but doesn’t waste any time jumping into what might be the most musically impressive track on their new album. It covers all of the elements that give Franz Ferdinand that progressive flair that captivates listeners.

Last but not least is “The Universe Expanded”, a quiet proclamation of nostalgic innocence with a bouncing bass and electro trills that spring off of whispered vocals. My only criticism is that it could have had a stronger chorus but everything leading up to it and after it is pure genius.

The second half of the LP repeats the majority of the tracks live featuring a few off of their second and third albums. They’re just as good live as they are recorded, something I can’t say about many artists I listen to on the radio anymore.

Check out their Soundcloud and Facebook for updates and concert times.

Check out a live studio performance of their song “Stand On The Horizon (Right Notes, Right Words, Wrong Order) Below: