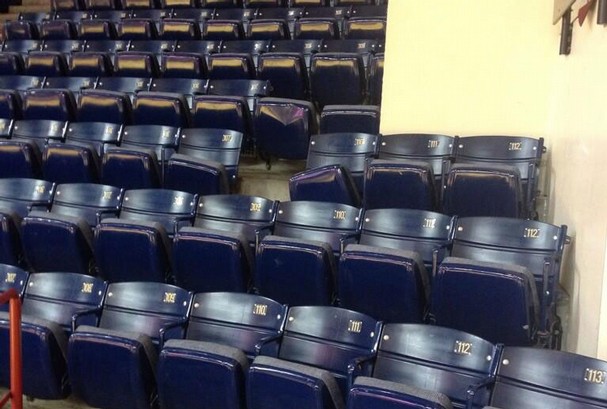 Edit 1: Iowa’s AD Gary Barta released a statement: “Obviously, we are disappointed tonight’s game had to be cancelled. Fran and his team are in contention for a Big Ten title and were looking forward to the opportunity to getting back on the court. The most important part of this equation is safety. We are in full support of Indiana’s decision to postpone the game based on the issues with Assembly Hall. Coach McCaffery and his team are returning from Indiana tonight. We are working with Indiana Athletic Director Fred Glass and the Big Ten Conference to determine when and, possibly, where to play the game.”

Iowa’s game on Tuesday night with Indiana was postponed with no make-up date set for now due to a falling metal beam in Assembly Hall. Here’s the video of the beam falling.

In an official release from Indiana, both tonight’s game and tomorrows were on hold until Assembly Hall had been fully examined. As seen in the video, an 8′ x 14″ beam fell into an area of seats heavily damaging them. Indiana cited safety as the main reason behind postponing the game.

The IndyStar then reported that Rick Fuson, chief operating officer of Pacers Sports & Entertainment, told The Star via email, “We did offer Bankers Life to hold the games (men’s and women’s, on Wednesday) night but understand that Iowa may be on the way out of town.”

Even though the Pacers are away from home on that night, Brendan Stiles confirmed via sources that Iowa was on the way back to Iowa City.

There is no-makeup date yet but the Big Ten policy on the issue stipulates that Iowa-Indiana have three days to decide on a suitable makeup date before the conference will decide on one.

On a more lighthearted note, here’s what @CBSSports writer Matt Norlander had to say about the situation:

Iowa-Indiana game postponed due to chair damage and it’s not Fran McCaffery’s fault.