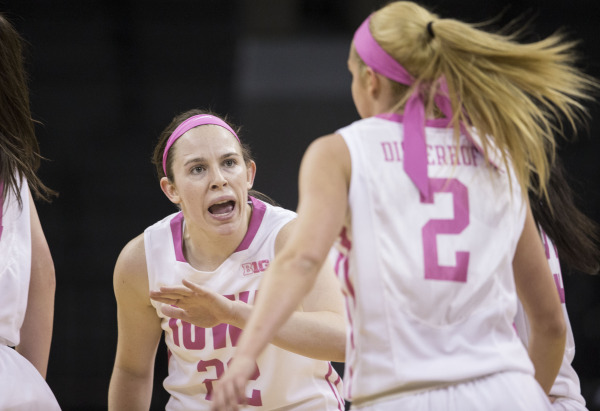 The Hawkeyes accomplished that by punishing the Illini around the basket, outscoring Illinois 36-10 in the paint en route to a 69-55 win Thursday night at a pinked-out Carver-Hawkeye Arena.

Center Bethany Doolittle used her size advantage to record a game-high 16 points, despite only playing 22 minutes due to foul trouble. Freshman Ally Disterhoft added 13 points, with 11 from Theairra Taylor and Melissa Dixon.

Iowa head coach Lisa Bluder said Iowa was able to exploit Illinois’ zone in the paint, and it led to easy points for the Hawkeyes.

“We did a great job of getting the ball inside,” Bluder said. “When we got the ball inside, they were pretty wide-open shots, and I do think us having a good knowledge of the type of zone defense that they were playing helps because we know what to look for.”

Iowa dominated the glass as well, outrebounding Illinois 40-23, including a 15-5 edge on the offensive end. The Hawkeyes were led in rebounding by Disterhoft, who notched a double-double with 10 rebounds.

Bluder also stated she was pleased with Iowa’s ball movement, as the Hawkeyes assisted on 19 of their 24 field goals. The Iowa head coach stated the assists are a trademark of Hawkeye basketball.

That is our style. We are going to pass the ball for better shots, and we’re going to give up shots to get better shots,” Bluder said. “That’s Iowa basketball. That’s what we do.”

The Hawkeyes led for the final 36 minutes, despite shooting just 4 of 18 from three-point distance. Iowa sharpshooter Melissa Dixon hit three second-half threes to offset an 0-for-6 start, three-pointers that aided the Hawkeyes in pulling away from Illinois, who trailed by just nine at halftime.

It was the 20th win of the season for Iowa, a mark that has been achieved eight times in Lisa Bluder’s historic tenure as the head coach of the Hawkeyes. Bluder said that while the NCAA Tournament may not put a premium on the 20-win plateau, it is still an important milestone.

The Hawkeyes remained in fourth place in the Big Ten, and now head on the road for two critical games for Big Ten tournament positioning. Iowa will take on Purdue on Sunday, and will meet Michigan in Ann Arbor next Saturday. With wins in these two road games, the Hawkeyes would cement themselves with a bye in the conference tournament, and would improve thier seeding in both the Big Ten and NCAA Tournaments.

Bluder said while the Hawkeyes recognize the difficulty of the task at hand, they relish the road opportunities.

“I feel like our team is playing well on the road, and we won at (Purdue’s) place last year,” Bluder said. “I know they’re in the top 25, but I think we play best against those types of teams.”