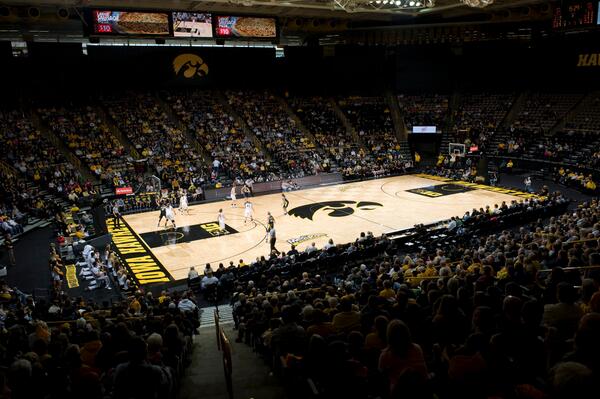 “Being able to come from behind to win a basketball game is great for our team,” Head Coach Lisa Bluder said.

What followed were two made free throw shots from Ally Disterhoft, who had struggled from the line in their first two games this season. With the ball in Dayton’s possession, Iowa had to find a way to get the ball back.

Tough pressure from Bethany Doolittle forced a Cassie Sant turnover, and in the ensuing possession led to the biggest basket of Sam Logic’s career. The three-point field goal to tie the game came with nine seconds left and sent Carver Hawkeye Arena into the loudest roar of the day. That bucket forced the game into overtime.

“It felt good and I was pretty open thanks to The(airra Taylor),” Logic said on how she felt after the shot left her hand. That shot tied the game at 90 points.

In overtime Iowa started off with a basket-and-one from Disterhoft and never looked back. Dayton only mustered three points in overtime and struggled to keep the ball in their possession.  Iowa finished the overtime with seven points to win 97-93.

Iowa played a complete team game against Dayton, tallying 30 assists on 34 field goals. Samantha Logic’s 14 assists, both a team and arena record, helped the Hawkeyes on that front.

Both teams pressed their tempo in both halves and Bluder said she was happy with that.

Iowa’s largest lead of the day came halfway through the first half, in which they led by 15 and controlled the first quarter of the game.

“I feel like our teams mirror each other,” Bluder said about both the Hawkeyes and the Flyers, “I felt comfortable with the pace out there today.”

This is Iowa’s first win over a ranked opponent this year; in 2012 they had seven such wins, a program record.

Iowa lead by double-digits in both halves, and the defensive breakdowns were one thing that worried Bluder.

“Maybe we need to work on defense some.. there was a lot of offense out there today,” Bluder said.

Logic finished the game with 16 points, 14 assists and five rebounds. That stat-line, along with her 28 points in Friday’s game got her voted at the 2013 Hawkeye Challenge MVP. Bethany Doolittle and Kali Peschel were also voted on six player all-tournament team for the Hawkeyes. Doolittle led the team with 22 points and Peschel in rebounds with 14.