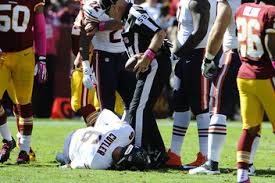 It was a season changing game last Sunday for the Chicago Bears against the Washington Redskins.  They lost their starting quarterback Jay Cutler to a groin injury that will keep him out a minimum of 4 weeks, but it could be longer.  They also lost one of their key defensive players, linebacker Lance Briggs will be sidelined with a shoulder injury.

It appeared that the injury wasn’t too significant when Jay first went down to the ground when he was sacked, but as time passed and Jay remained on the ground, that feeling began to change.  He was finally able to get up to his feet and limp off the field under his own power, however once he reached the tunnel it was just too painful for him and he needed a golf cart to take him the rest of the way to the locker room.

Before Cutler went down he was just 3 for 8 passing with just 28 yards and an interception.  Jay had almost made it an entire year without missing any time at all.  Last time he missed a game was back when he sustained a concussion against the Houston Texans on November 11th of last year.

Josh McCown will now become the starting quarterback for a team that has started to struggle.  McCown came in for Cutler and completed 14 of 20 pass attempts for 204 yards and a touchdown. McCown will now be trusted to keep this team above water until Cutler is able to return.  With a young offensive line and a struggling defense this might be a tough task to ask out of anyone.

Lance Briggs has a very small fracture in his shoulder that will keep him out of the lineup for at least six weeks.  Briggs, who is a seven time pro-bowler and is a leader on this team is the second linebacker lost for the Bears after losing DJ Williams a few weeks ago for the entire season.  This defense has been brutal all year and absolutely cannot afford to keep losing key pieces.  Losing Briggs almost makes you wonder if a call is being put in to former Bears linebacker Brian Urlacher.  His services might be needed.

The Bears will head into their bye week banged up, but it is a chance to rest and try to get as healthy as possible before they take on the Green Bay Packers on Monday Night Football here in two weeks time.