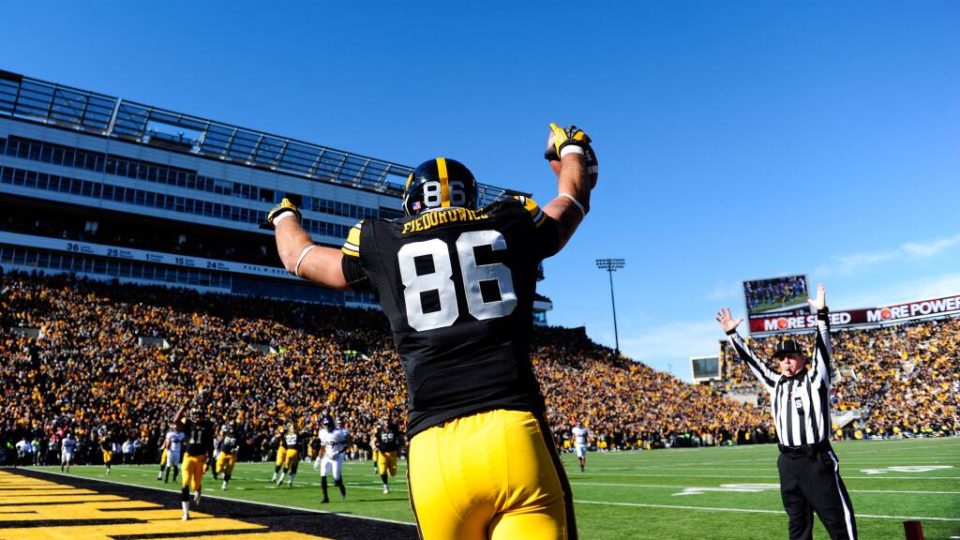 “That was kind of our message, 60,” Head Coach Kirk Ferentz said after a 17-10 overtime victory over divisional foe Northwestern, “and maybe this is even better because it’s beyond the 60.”

Iowa scored in overtime on an eight-yard pass from Jake Rudock to C.j. Fiedorowicz in a cover zero blitz from Northwestern. Rudock finished the day 19-of-27 for 169 yards with one touchdown and one interception.

Rudock said, “I don’t remember getting hit, and didn’t see C.j. (Fiedorowicz) catch it, but heard the crowd roar right after.”

After taking multiple big hits throughout the game, Rudock assured that even though he doesn’t remember if he got hit or not, that he was ok and it may have been just getting caught up in the moment.

The Iowa team had plenty of teams rush their field last year after losses, namely Central Michigan and Purdue in 2012.

After Louis Trinca-Pasat brought down Northwestern’s Cain Colter in the backfield on fourth down in overtime, the team made 2013 their year to rush the field. It was one of Iowa’s six sacks on the day. They tackled each other, jumped all over and celebrated a tough conference win.

“I don’t even know who I tackled, but I was out there tackling and having a fun time after a great win with the guys,” Runningback Damon Bullock said, Bullock finished with 52 yards on 17 attempts.

Desmond King received his first freshman of the week award for his effort against Ohio State and lived up to the title by recovering a Northwestern fumble with 3:14 remaining.

“He’s(King) a confident player. Sometimes too confident, but he doesn’t seem overwhelmed by it.” Ferentz said.

Towards the end of regulation Iowa ran down the clock from 3 minutes and 14 seconds to seven seconds on a drive that totaled eight plays. Northwestern elected not to use their timeouts, something that in the end could have given them upwards of a minute in extra time.

“We were playing to win the game. We wanted to see what happens…you know they were going to have to go for it.” Northwestern Head Coach Pat Fitzgerald said about the decision.

Northwestern controlled the second half, outscoring Iowa 10-0 in the half after heading into the locker room down 10-0.

“The defense has to get used to making some adjustments that we haven’t made in practice yet,” linebacker Anthony Hitchens said,”and that’s why we had some trouble in the second half.”

James Morris, Christian Kirksey, and Hitchens anchored a defense that contained Cain Colter relatively well. Iowa mixed it up against Colter by spying him, lining up in a 3-4, and by keeping end contain very well throughout the game.

Running back Mark Weisman had a decent first half, but was shut down in the second and finished with 13 attempts for 56 yards. Weisman has not had a 100-yard rushing game since the Minnesota game.

Kirksey said the difference in the team from the second half to overtime was just riding on the emotion of it all with the crowd and home field advantage.

Iowa will have to carry that momentum into next week’s battle at Kinnick Stadium for a 11:00 a.m. kickoff against the Wisconsin Badgers. With Iowa moving to 2-2 in the conference they will have to beat Wisconsin to keep any chance of Indianapolis alive.