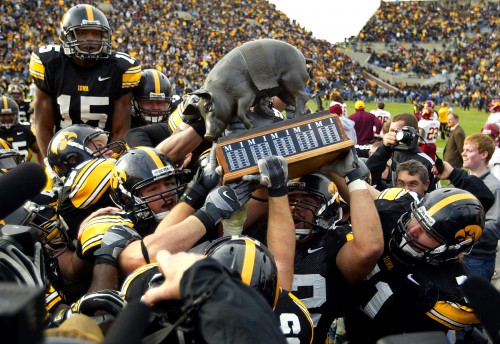 In the same way a four-year starter for the Iowa football team wishes to end their career with a fulfilling sense of victory and accomplishment, I too want to leave the University of Iowa with something more than the intangible Hawkeye pride I’ve already possessed for years…

In the context of football season, (holy porkchop, we’re almost a month into the schedule) bragging rights are represented through traveling trophies designated for each respective rivalry game. (Yes, I realize the ultimate prize for FBS football teams is the coveted glass ball awarded to the BCS national champions, followed by other BCS bowl trophies and conference championships, but I’m sticking to realistic goals here.)

The Big Ten’s participation in the conference realignment carousel of recent years (adding Nebraska in 2011, Rutgers and Maryland in 2014) has already taken its toll on some of the league’s most famed rivalries. However, the non-conference matchup with Iowa State remains an annual tradition in the Hawkeye State. During my tenure as a UI student, the Hawks have disappointed in their performances against the Cyclones, having lost two straight heartbreakers after dominating State in 2010.

Despite hailing from the Milwaukee area, I carry the same passionate hatred for Iowa State as my native Iowan brethren. To me, a loss to Iowa State is akin to losing an arm wrestling match to a little sibling. It just shouldn’t happen. Thankfully, the Hawks emerged from this year’s contest with a solid 27-21 victory in Lames on Sept. 14. With the Cy-Hawk trophy returning to its rightful home in Iowa City, all is right in the world again. One tally down for senior year bragging rights.

As Big Ten play approaches, the Hawks will begin their conference schedule in Minneapolis, where they’ll battle the Minnesota Gophers for Floyd of Rosedale, an infamous bronze pig that the Hawkeyes reclaimed by destroying the Gophs in Kinnick last fall. Last week’s dominant performance against Western Michigan gives Iowa some much-needed positive momentum heading into conference play, and the upcoming date with an undefeated Minnesota team will be a formidable test for Ferentz’s squad.

During my freshman year at Iowa, in November 2010, my parents and I made a seemingly endless drive up to freezing, snowy Minneapolis only to see the Hawks fall to a far inferior Minnesota team. The blistering cold was terrible enough; the embarrassing loss stung even more.

I’m still hoping to make my way to the Twin Cities for this year’s installment in the rivalry, but I can’t help but imagine how awful the five hour drive back to IC would feel following another loss at Minnesota. Whether or not I attend the game at TCF Bank Stadium, retaining Floyd would be a fantastic accomplishment for the Hawkeyes, but it won’t be done easily.

A quick trip around the Big Ten football blogosphere yielded evidence that Gopher fans are justifiably concerned that their perfect start is in serious jeopardy on Saturday. To quote this writer from The Daily Gopher, “I wouldn’t be shocked to see Floyd making the trip back to Iowa City.” (Let’s hope he’s right.)

After a two-year hiatus, the Wisconsin Badgers return to Iowa’s schedule this season, as the Heartland Trophy will be up for grabs in Iowa City on November 2. Given my background as a Wisconsinite who prefers to consider himself an Iowan, this game will mean more to me than any other on our schedule. You can rest assured that I’ll be writing plenty about this game when it comes around.

Finally, the Heroes Game between Iowa and Nebraska will be another trophy opportunity for the Hawks when they travel to Lincoln to face the Huskers on Black Friday.

So, the likelihood of Iowa earning a bid in the 2013 Big Ten championship game is slim, to put it kindly. Iowa’s chances at a major bowl game are equally minute. Fortunately, these four intense rivalry games provide plenty of incentive for the Hawks in 2013.

Championships are great, trophies are nice and shiny, but I just want bragging rights.