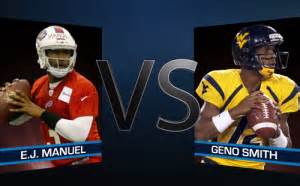 Geno Smith and EJ Manuel, two rookie quarterbacks, will find themselves thrust into starting roles when week one rolls around in about four days.  Smith will start for the New York Jets and Manuel will start for the Buffalo Bills.

Smith finds himself starting after Mark Sanchez was banged up in the third preseason game and Manuel finds himself there after Kevin Kolb sustained a, what some people are calling, career threatening head injury.

Both of these guys were big time college quarterbacks, Smith put up huge numbers at West Virginia and Manuel helped the Florida State Seminoles to an Orange Bowl victory last year.

Geno hasn’t had the most impressive preseason, but if you’re Rex Ryan you have no other choice.  Smith has had some turnovers and has definitely been outplayed by Sanchez in the preseason, but Ryan’s decision to have Sanchez in the game late against the New York Giants cost Sanchez the starting job.  Not only has Geno struggled, but he’s also in this gigantic spotlight that is the quarterback of the New York Jets.  Week in and week out he will be scrutinized for whatever he does, good or bad.

I expect Smith to start the first couple of weeks in New York, but once Sanchez is back healthy he will be the starter.  Sanchez gives you the better chance to win football games at this point in time.  I still think Geno will be a productive quarterback, but he needs to hold a clipboard for a year or two.

It might come as a shock to most of you, but Manuel actually has more pressure on him to perform well from a front office’s stand point.  If you’re a Jets fan, you know that Sanchez is still back there if Smith struggles, but for the Bills, if Manuel doesn’t perform well their next guy is undrafted rookie Jeff Tuel.  Manuel needs to have a solid first four weeks to prove to Bills’ personnel that he can play in the NFL.

Manuel, like Kolb, sustained an injury in the preseason, but his was far less severe compared to Kolb’s.  He says he is feeling fine and was named the starter.

Manuel has a productive preseason for the Bills, he had a 78 % completion percentage, threw for just 200 yards, and also had two touchdowns.  Manuel has shown some promise, but will he be able to hold up and is this injury gone like he says it is.  Those are the question marks for the Bills.

I think Manuel will have a year like Ryan Tannehill did last year in his rookie season for the Miami Dolphins.  Manuel will progress as his career goes on and I am interested to see how he handles himself come Sunday.