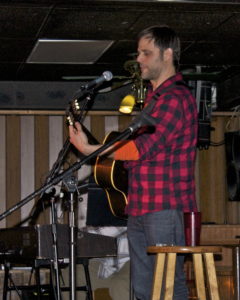 Mission Creek touts its festival as a week of music as well as literature, and this event combined both beautifully. Wednesday night at the Mill hosted a lively group ready to watch one of Iowa’s best known bands, Christopher the Conquered, share a show with a unique poetry project, Michael Zapruder’s Pink Thunder. I came to the venue with expectations of a good night and I was not disappointed.

One of my favorite local bands, Christopher the Conquered, opened the night and the energy from the crowd fueled the show. Chris Ford was so successful in evoking feeling from his soulful lyrics that I almost felt awkward taking pictures during his set! Colloquial conversation filled the gaps between songs such as The Truth is On It’s Way and Chris and his Black Gold Brass Band clearly won over the audience.

Building on Mission Creek’s tradition of literature, Michael Zapruder’s Pink Thunder was a unique experience combining music and poetry. Instead of a traditional singer-songwriter set, Michael used other writers’ poems in the Pink Thunder project and turned them into songs. By doing this, he bridges the gap between music and poetry.

I felt that this connection was extremely powerful and effective and definitely opened my mind to poems I wouldn’t have heard otherwise. He musically performed poems such as “Twins” and “Pennsylvania.” After one of his performances, he commented that he realized how ridiculous some of the works sounded once he read them out loud—something extremely unique to hear at a concert!

The night was a great cornerstone in the puzzle that is the Mission Creek Festival. Local Iowa music and poetry: what the festival is all about!