The Englert Theatre was packed last Monday night, February 25 at 7 PM. The crowd, filled with students and Iowa City citizens, was there to see one incredible woman: Ayana Mathis. Mathis, a graduate of the Iowa Writers’ Workshop, came back to Iowa City to read from her debut novel, The Twelve Tribes of Hattie. The novel’s recent acclaim is partially due to its acceptance in to Oprah’s book club. 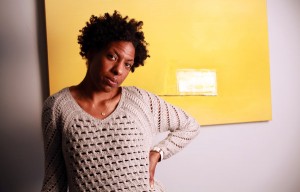 Following a wild applause, Ayana Mathis took the stage and read a short poem by Gwendolyn Brooks entitled “Kitchenette Building.” She then commented on the poem, noting that it questions whether it is possible to feel beauty and hope in the midst of hopelessness and despair. Brooks’s poem is similar to Mathis’s The Twelve Tribes of Hattie.

Ayana Mathis then proceeded to read a short chapter from her novel. The novel itself encompasses the life of Hattie, her husband August, and their twelve children. The selection read by Mathis concerns Hattie’s youngest child, Ella, and Hattie’s sister Pearl. Ms. Mathis never ceased to entertain her audience, providing accents for August, Pearl, and a variety of other characters.

Following her reading, the author answered the audience’s questions. She discussed the relation of the book to the Twelve Tribes of Israel and traveling from a state of bondage to a state of freedom. At 8 PM, the reading concluded with a book signing by Ayana Mathis. The Twelve Tribes of Hattie can be found at any local bookseller.