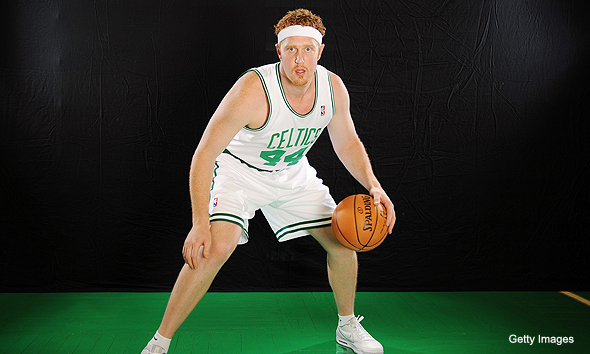 Former Chicago Bull, Brian Scalabrine, is a jack of all trades. After an 11 year NBA career featuring two Finals appearances with the Nets and Celtics, Scalabrine decided to hang up his headband and pursue a career in broadcasting.
But don’t worry basketball fans, the White Mamba is back on the court, just not in an NBA uniform. As part of a promotion for 98.5 The Sports Hub’s morning show, Toucher and Rich, Scalabrine would face 4 of Boston’s best basketball players. Excluding the Celtics, Boston ballers sent in video auditions showing off their skills. Four people were selected to face the Mamba in a game of 1 on 1.

Over the years Brian Scalabrine has developed an “everyman” image. Many fans viewed him as a normal guy who happened to luck out and make it to the NBA. He was also affectionately known in Chicago as the “victory cigar” for Coach Thibodeau due to his garbage time minutes. Scalabrine’s persona made him a fan favorite across the league but he’s also widely criticized.
The Mamba has had enough of the idea that anybody could beat him. The “Scallenge” gave him the opportunity to stifle this assumption. Scalabrine decisively dominated the competition beating every challenger with a combined score of 44-6. At one point he even played 1 on 3 and won. You can find videos of Scalabrine dunking and draining threes over his opponents online.
Scalabrine may look unimpressive playing against the stars of the NBA but it’s now proven that he’s no “average joe”. Even the worst NBA player is in the NBA for a reason, and now Bostonians are well aware of that, especially the ones that were dunked on. Scalabrine, says he may return to basketball but for now he’s happy as the voice of the Boston Celtics.