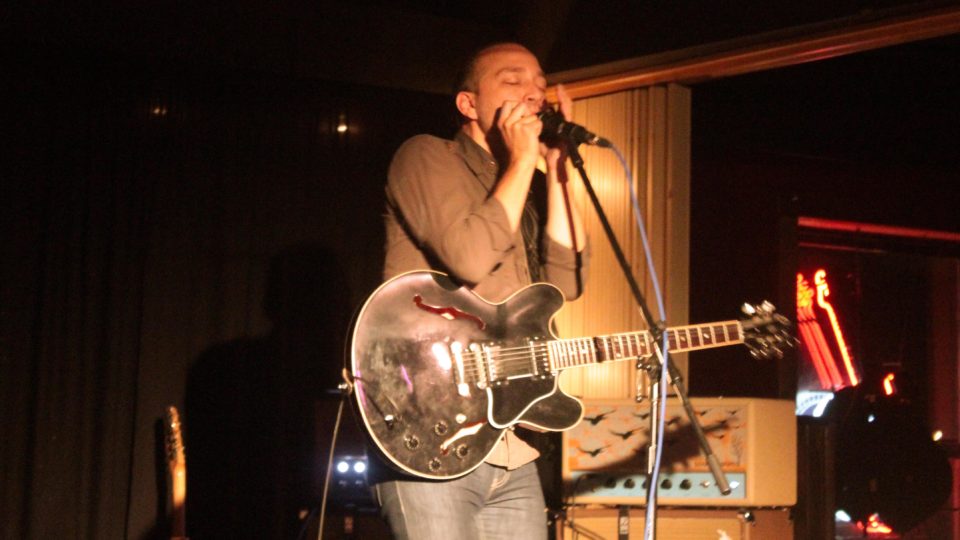 As real rock journalists, Austin Smoldt and I were on scene last Wednesday at the Helio Sequence show located at the wonderfully modest restaurant, The Mill. The crowd was made up of colorful and eccentric hipsters, and late 20’s post-grads looking for an entertaining night in Iowa City. All were abuzz with fervid late-dinner/pre-show conversation whilst enjoying the mostly 60’s tunes that played overhead. We ordered cheese fries and people-watched while waiting for the first band to come on stage. The most notable person we saw was an extremely tall Art Garfunkel wearing a holiday sweater. I believed him to be the real Art Garfunkel, but somehow made younger… Modern science, what a concept!

As Austin and I received our cheese fries (which were really more like clods of warm, solid cheese adhered to the top layer of fries) the first band stormed the stage: Ramona Falls. In a not-so-wacky turn of events, the Art Garfunkel looking dude revealed himself to be the band’s pneumatic drummer and the auspicious leader of the four-piece ensemble.

Booming drums, rhythmic guitar, steady deep bass, thoughtful use of both the piano and synth, and a vivacious violin were signatures of the band’s 45 minute set.  They weaved together some of the most cohesive live music I have ever heard. Each musician’s playing complimented the others’ in a perfect way, both actively and subtly at times, enhancing the performance. Honestly, for most of the show I could have imagined Ramona Falls being some indie-rock band from Westeros (the land in Game of Thrones). The music was rich and epic in scale, a fusion between acoustic and electric that culminated in a remarkably interlaced and beautifully harmonized tale. One could easily imagine their set played to dramatic events unfolding at the edge of a sword. I was pleasantly surprised by the magnetic performance this band achieved, and I strongly suggest those of you reading this to check them out.

After a brief intermission, the second band and headliner of the show, took front and center. Two very unsuspecting looking guys stood before us; if I had seen the duo drinking coffee at Starbucks I really wouldn’t have guessed that they comprised a two-piece dream-pop band. As they started playing their glimmering, reverb-laden set, the awkward show dancing began in front of the stage. (You know what I mean).

Stoking the harmonized fire that Ramona Falls had set ablaze, Helio Sequence astounded me with their lush, poppy lyrics played in tune with snappy cymbal, heavy percussion, poppy synth, and plucky strings. You could almost feel an immediate shift in atmosphere as their music overwhelmed the venue. The lights seemingly became softer and yet richer with their yellow and blue hues illuminating the stage. What resulted was a dream-like show, the likes of which I’d never experienced. Each song melted into the next, the reverb parsing through dimensions, echoing through our minds.

This continued throughout the show, except for when the artists broke for small conversations with the gathering crowd.

One song, aptly named “The Harmonica Song,” stuck out in the best possible way. In the midst of their floating, mesmerizing set, the blasting juxtaposition of harmonica threw me into a shock. I was subsequently soothed by familiar (yet distinct and crooning) vocals, only to be set back on edge by ever louder and faster harmonic shredding.

Helio Sequence is one of the rare bands which, instead of using reverb to mask an inability to vocalize, use it instead as an atmospheric-enhancement to their stunning live vocals. This was definitely a show I won’t forget. I would also suggest that anyone who enjoys the poppy dreaminess of The Shins (a la Wincing the Night Away) should check out Helio Sequence’s latest album, Negotiations.