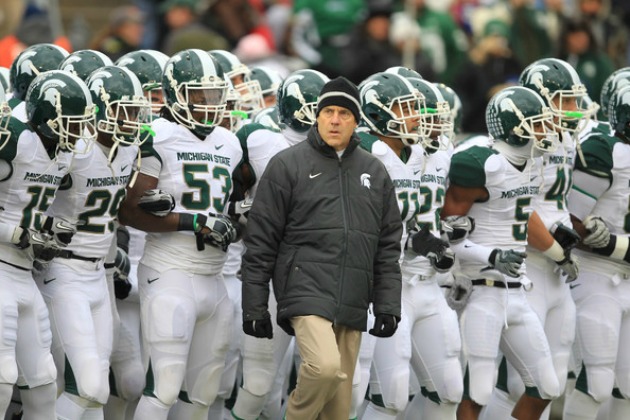 This is more superstitious pondering than anything else.  A fun portion of sportswriting is making predictions based off of empirical evidence;  empirical evidence that usually turns out to be inconsequential by game’s end.  It’s scrutinizing an individual player’s mental state and a team’s mentality from game to game.  How did they look in game action?  How did they sound in interviews?  Sad?  Happy?  Hungry?  Tired and fed up?  Superstitious pondering and predicting the outcome of games are in the same family of sports-related jibber jabber. It’s speculating based on no hard facts or scientific methodology, other than trying to read a team’s future success based on film and media interviews that are nothing more than coach and player rhetoric.  It’s hot bosh that sports enthusiasts eat up. What else are people going to do while anticipating a big game?

Iowa plays at Michigan State on Saturday.  Michigan State won at Indiana this past weekend.  The Hoosiers, who have been down as a program for a long time (save for an emotional 2007), attacked Michigan State’s defense, building a 17-0 lead through the first quarter, and holding a 27-14 edge at the half.  Eventually, the Spartans came back and won, outscoring Indiana 17-0 in the second half to claim a 31-27 victory.

It was a spirited effort by second-year Indiana head coach Kevin Wilson and his ever-underestimated players, but Michigan State did hold Indiana to 37 yards in the second half.  The Spartans escaped Bloomington alive and are now preparing for an Iowa team coming off an idle week and a 31-13 win over Minnesota the week before.  Let’s take stock of the psychological status of each team, even though that is not possible. Remember, hot bosh and jibber jabber.  This is just for fun.

What does a 31-27 Michigan State win over Indiana mean for the Spartans?  What does it mean for Iowa?

*Say Michigan State steam-rolled Indiana last weekend, something like 35-7.  The offense played great, better than it has all season in a definite rebuilding year for Mark Dantonio’s Spartan attack. The defense did its job in holding Indiana to seven points in a road blowout.  It appears Michigan State is back on track after a gut-wrenching 17-16 home loss to Ohio State the previous week, one of the Big Ten’s best teams.  This scenario, a dominant road win for Michigan State, would not be good for Iowa had it happened. Flushing a loss with a confidence-building road victory is how all teams want to function.  An Iowa team with a fragile comprehension of success taking on a Michigan State team that got its groove back seems to tip in Sparty’s favor.

*Say Indiana finally broke through and got Kevin Wilson his first Big Ten victory.  The Hoosiers built a 27-14 halftime lead before piling it on in the second half to win, 41-21.  It was a karmic build-up type of game, where tedious preparation and some lucky breaks finally come together for a downtrodden team.  Meanwhile, Dantonio, his players, and Michigan State’s fans are embarrassed.  Indiana went 1-11 last year.  Michigan State went 11-3.  In his post-game press conference, a terse Dantonio vows to have his team ready to play Iowa. Dantonio finishes each statement with, “Next question.”  I have an inkling that this scenario, an embarrassing loss to Indiana, would not play out well for Iowa either.  Dantonio would put his players through a grind to get ready for the Hawkeyes.  He’s the type of coach who goes from serious to severely serious under much lighter circumstances.  Also, it’s back to Spartan Stadium, the friendly home.  The coaches press fundamentals and conditioning leading up to the Iowa game.  The team comes out angry and ruthlessly attacks James Vandenberg.  There would be no falling to 3-4 with a loss to Iowa and an inexcusable third loss at home.

Conversely, a humiliating loss at Indiana could begin a free fall for Michigan State (it did for Iowa in 2006). Dantonio loses the hearts and minds of his players.  Iowa squeezes out a tight 21-19 win in the final seconds over an unfocused Spartan team.  A free fall, however, seems unlikely under Mark Dantonio.  He is no John L. Smith, the former MSU coach who is currently the lame-duck coach at Arkansas.  Smith’s Spartan teams faded at the first sign of adversity.

Alright, let’s get to what really happened.  Michigan State won 31-27.  They didn’t lose, but they didn’t dominate either.  What their win at Indiana really symbolizes is vulnerability in victory.  Iowa’s players look at game film and ultimately see a team with holes on offense. The Spartans had to stand up to beat an Indiana team with a lousy defense.  Did Dantonio’s players fly back home singing “We Are the Champions?”  No.  They won, barely, but they were supposed to win.  One cannot pin the close call on an intimidating stadium atmosphere, either.  It’s not there at Indiana.  It’s likely that the Spartans were still smarting from a 1-point home loss to Ohio State.  They were distracted.  So, did they get their tense-victory game out of their system?  One could also point to the Spartans’ 23-7 win over Eastern Michigan in week 4 as another too close for comfort game. Does a close victory over a bad but determined team mean Michigan State will be distracted again?  Just some hot bosh for us to chew on.  It’s why they play the game.